To receive our newsletter, give us your email.

Masterpiece of the Romanesque art 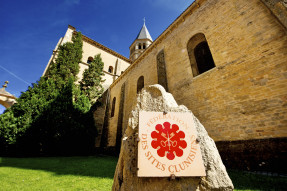 This masterpiece, a jewel of medieval art, is the best conserved example of Cluniac architecture in Bourgogne. The church was built in the 12th century by Hugues de Semur, the most important of the abbots of Cluny.

This ancient priory is still intact and so gives an impression of the splendour of the Cluny Abbey. At a moment when the grand abbey had practically disappeared, Paray III used the designs and architecture as those used by an order at the summit of its power.

Outside you will appreciate the exceptional chevet, rising in stages from the ground to the bell tower.

The priory church of paray-le-Monial was built in the 12th century under the direction of Hugues of Semur, the sixth abot of Cluny. It was built at the same time as Cluny III of which it is an "admirable smaller version".
It was raised to the rank of minor basilica by Pope Pius IX in 1875, and dedicated to the Sacred Heart, in remembrance of the apparitions of Christ to a Visitation nun, Saint Margaret-Mary Alacoque, during the 17th century, and of the great pilgrimages followinf these apparitions. it was restored during the 19th century by Eugène Millet, a disciple of the French architect and restorer Viollet-le-Duc.
Interesting archéological excavations were carried out from 1997, together with the entire restauration of the building.

Inside, the barrel vault has unique lighting. The choir is remarkable because of the painting of the 15th century apse. It opens onto the elegant ambulatory.

This Parish church was enhanced throughout the centuries by the work of numerous artists. During the renovation, between 1997 and 2005, J.-C. Detallante designed the lights, evocative of Romanesque bestiary. In 2011, the Way of the Cross was realised by the Enamel workshop of the abbey of Ligugé inspired by the watercolours of the artist P. Lafoucrière.