To receive our newsletter, give us your email.

A young sister in the Visitation Order 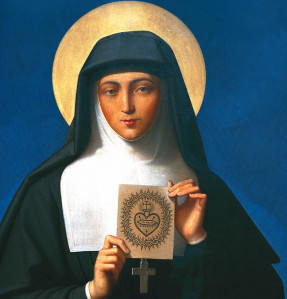 A young sister in the Visitation Order, Margaret Mary was born in Vérosvres. From her childhood she wants to devote herself to a pious life. In 1671 she enters the Monastery in Paray le Monial, aged 24 and she receives several apparitions of Christ. With the help of Claude la Colombière, (canonised in 1992), she spreads the cult of the Sacred Heart.

Margaret Alacoque is the fifth child of Claude Alacoque and Philiberte Lamyn, who enjoyed a good social standing. From her early childhood, Margaret showed a particular devotion towards the Blessed Sacrament and she prefered silence and prayer to childrens' games.
Aged 5, when staying at her godmother's whose daughter was a nun, she heard them talking about religious vows, and unknown to everyone, she made her first consecration during mass where she pronounced the words : " Oh my God, I devote to you my purity and make a vow of perpetual chastety ". After her first communion, aged 9, she practices in secret strict bodily mortifications, before paralysis makes her bedridden for four years.

At the end of this period, having made a vow to the Virgin Mary to devote herself to religious life, she was cured on the spot. In gratitude on the day of her confirmation, she added the Christian name Mary to her baptismal name.

Upon the death of her father, together with her mother she was accommodated with relatives, who tormented them, taking away the control of their ways and means. Margaret Mary found comfort in prayer , and it was then that she had her first vision of Jesus Christ. This did not surprise her, she thought that others also received these visions.
When she was 17, her family was able to recover its belongings, her mother confided in her her wish to set her up in the world. So, although regularly suffering from the penitence that she imposed on herself, she began to take part in worldly activities. One night, having returned from a dance, she presumably had a vision of Christ during a flagellation : He reproached her for her infidelity after He had given her so much proof of His Love. During the rest of her life, Margaret Mary regretted two " mistakes " she had made at this time : for wearing a few accessories and for putting on a carnaval mask to please her brothers. She visited several convents and going into the Visitation Convent in Paray le Monial, an inner voice said to her : " It is here that I want you ".

HER ARRIVAL IN PARAY LE MONIAL

On May 25th 1671, aged 24, she entered the monastery and, in November 1672, she pronounced her perpetual vows. Suffering from poor health, she nevertheless continued with her flagellations as well as the most extreme indeed the most repugnant macerations, which she herself mentions in her Memoirs.

The most famous of these apparitions is the one in June 1675 : Jesus then showed her His Heart saying : " Here is the Heart that loved man so much, [...] to the point of exhausting and consuming to show them Its Love and, as an acknowledgement I only receive from most of them ingratitude... ". Henceforth Margaret Mary thought that she had been given a mission to establish the particular devotion towards the Sacred Heart. These apparitions caused hostility with the rest of the members of the community, who treated her as a " visionary ", to the extent that her superior ordered her to devote herself to the communal life. However, her obedience, her humility and her charity towards those who persecuted her finally got the better of her and her mission was recognised by even those who had shown her the greatest opposition. With the help of Father Claude La Colombière, whom Jesus had introduced to her as her " true and perfect friend ", Margaret Mary revealed the message which Jesus had given her. It is the beginning of the cult of the Sacred Heart. Inspired by Christ, Margaret Mary established the practice of the Holy Hour, which for her consisted of praying and prostrate with her face against the ground, from 11 in the evening until midnight, the first Thursday of each month, this in order to share the mortal sadness which Christ had suffered when He was abandoned to His agony by His apostles ; then she received the next day Holy Communion. Christ had expressed to her His desire that a Feast in honour of His Sacred Heart should be celebrated on the Friday following the octave of the Feast of Corpus Christi ; He called the saint " beloved disciple of the Sacred Heart ", and heir to all His treasure. During her final illness, she refused any relief constantly repeating : " what I have in Heaven and what I desire on earth is only you Oh my God ", and she died pronouncing the name of Jesus.

FROM BLESSED TO SAINT

The opening of the Diocesan enquiry for beatification took place on October 15th 1714. The discussion about the mission and virtues of Margaret Mary carried on for years. Subject to examination was the totality of her actions, of her revelations, her spiritual writings and her teaching concerning the devotion to the Sacred Heart, which she had exposed and of which she was the apostle.
Finally, the Holy Congregation of Rites voted in favour. On March 30th 1824, Leon XII proclamed her venerable. On August 19th 1864, following the recognition by the church of three miracles, the brief of beatification was signed under the pontificate of Pius IX. The beatification ceremony took place on September 18th 1864 in Rome. She was canonised by Benedict XV on May13th 1920.